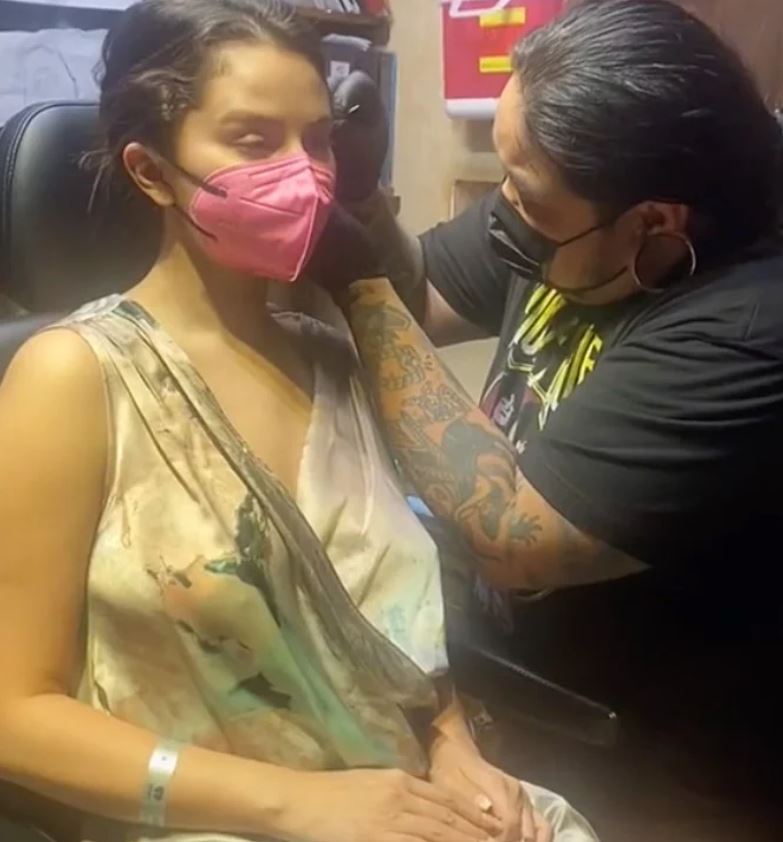 Selena Gomez got a new piercing during a fun night out with friends.

The Only Murders in the Building actress, 29, and Indie rock band Girlpool (formed by Gomez' friends Avery Tucker and Harmony Tividad) enjoyed dinner and then decided to take an impromptu trip to a Build-a-Bear Workshop store just for fun. They documented the night out on TikTok, but things didn't go as planned for the group.

When Gomez and her friends arrived at a mall less than 30 minutes before closing, they couldn't track down the Build-a-Bear store. So instead, the group made an impromptu decision to get body piercings. In the TikTok video, Gomez can be seen calmly sitting in a chair in the studio as she gets her ear cartilage pierced. After she was done, the star snapped a selfie with her body piercer.

"Got something! Right here," Gomez said when she turned her head to show off her new hoop helix piercing. Lately, Gomez has been busier than ever with the release of her hot new Hulu show Only Murders in the Building (it just got renewed for a second season) and continuing to grow her cosmetics brand, Rare Beauty. When it comes to finding a second to recharging, Gomez likes to sneak in a snooze.

"A nap is my best bet, not gonna lie," she told PEOPLE about her favorite way to practice self-care. "Taking a nap when I'm feeling a little low is nice because I feel like I can start over."

She even joked about her obsession with napping in a recent TikTok. With the theme song for Only Murders in the Building playing in the background, Gomez posted a silly compilation of photos of herself sprawled all over set throughout filming while taking a nap.

She captioned the TikTok, "Only Naps in the Building."

Rules And Regulations For MINORS! UNDER 18 If you are under the age of 18, you MUST have a *documented CUSTODIAL PARENT or LEGAL GUARDIAN present.

@sickletattoo had a blast doing this one! Fly on o

We are having a Valentine’s Day Lake Arrowhead T

This was Wickedly done! Don’t sleep on getting t

@jimdowntattoos did a barking mad job with this on

Purr-fect. This was pawed at by @sickletattoo over

@joshua_gray87 did a pretty acute job with this on

Repost from @lakearrowheadtattoo • Looking for t

@dannydunbar knew exactly where he was going with

@jimdowntattoos took a stab at this and murdered i

Halloween forever. This was done by @sickletattoo