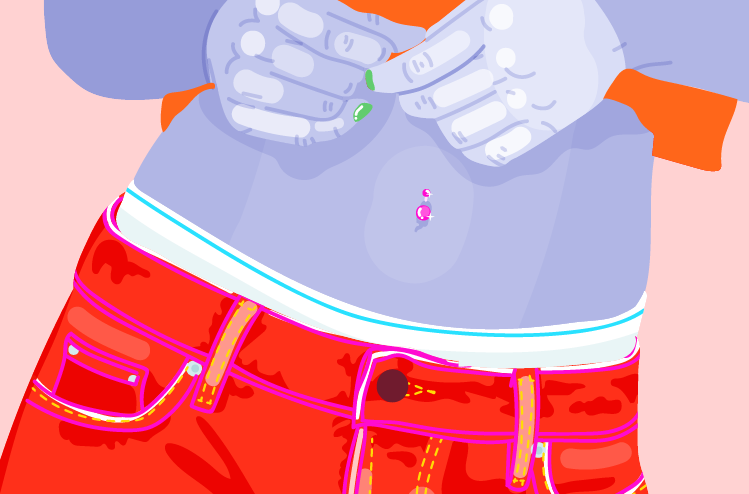 A few months back, I was stuck in an elevator with a conservative-looking woman. After about five minutes of pumping that red emergency button, we decided that if we were going to be trapped in a tiny box together, we might as well get to know each another — and, eventually, the topic turned to body piercings. Turns out, she and a friend had both gotten their belly buttons done years before, and while the jewelry (and the friendship) was long gone, a tiny dimpled memory remained on her navel. She’d like to get rid of it, but how? Well, stranger, this one’s for you. (We were eventually rescued, by the way…)

Whether you need to temporarily hide a piercing for a job interview or you’d like a permanent fix because sweet-Moses-what-where-you-thinking, you actually have many more options than you think. We asked a team of experts — including a dermatologist and two piercers with 35 years of experience between them — for their best tips on hiding a piercing, really making it disappear, or simply improving the look of a hole that’s scarred or migrated over the years.

Good and semi-obvious news! If you realize right away that your new notch is not for you, it’s likely to close on its own. “When you get a piercing, it takes four to six weeks for it to heal up, after which time the hole can be permanent,” says New York dermatologist Joshua Zeichner, MD. “Take out the piercing ASAP, the sooner the better, and if it is early enough, the hole will simply close.”Piercings done on softer tissue (think nipples and navels) tend to close a little bit easier than those on harder cartilage (nostrils and ears), says Pineapple, a 15-year piercing vet who works at Shaman Modifications in Austin.
But you can speed up the process a bit: “A hot compress and a kneading massage will help minimize the appearance of a piercing right away, and, with repetition, help close up that hole faster,” advises Pineapple.

If you’re a little late on closing up a nose or Monroe piercing, don’t sweat the tiny mark; you’re probably the only one noticing it. “A lot of times, facial piercings involve such a small wound — at worst, even a scar is going to look like an oversized pore,” says James Rajewski of Studio City Tattoo and Body Piercing in Los Angeles. “That said, emu oil is one of the most foolproof ways for preventing scar tissue. Also, tea-tree oil, properly diluted, works to make a post-healed piercing less visible.” He recommends those oils for scarred belly button piercings, too.

Fill It
If you love your piercing but maybe the conservative cousin whose wedding you’re in does not, consider Dermaflage, a hi-tech silicon filler that essentially creates temporary synthetic skin. (It’s what was used for Harrison Ford’s ear piercing in The Force Awakens, because apparently no one has piercings in space.) “What makes it different is that it builds and it conceals, whereas if you covered your piercing with liquid foundation, you’d still have a hole in your face,” explains founder Jocelyn Atkinson. The applicator looks like a needle-less syringe with two chambers, one for each of the two-part formula, and when you squeeze them out simultaneously, they combine and transform from a liquid to a flesh-colored solid in about two minutes. After it’s applied, you press a little textured pad against your skin to give it a lifelike finish.Dermaflage is water-resistant and withstands movement. (So, yes, you can use it for a pool party.) And, it even works on gauges up to three-eighths of an inch. For those, cover your fingertip with a bit of soap or oil so the Dermaflage won’t stick to the finger, and then fill in the hole,spreading the product beyond the outer edges of the gauge so that it blends imperceptibly with the rest of the lobe —
that trick also helps it hold longer. One more hot tip: If you’re planning on wearing foundation, skip this spot (you won’t really need it there anyway) or use a mineral powder foundation. “A silicon-based powder or a silicon-based liquid foundation will stick to the silicon and ruin the effect,” says Atkinson.

ANOTHER BONUS OF GETTING A NEW, BETTER PIERCING IS THAT THE SWELLING MAY HELP CLOSE THE OLDER ONE.

Stitch It
Rajewski, who has spent 20 years piercing folks in 49 states, has also undone quite a few piercings — including reconstruction on stretched-out lobes and, in rare cases, on exceptional scarring of the lip or the nose. (Belly button piercing holes that have stretched are great candidates for stitching, too.)But most piercers aren’t qualified to do that; he estimates that 90% of reconstruction procedures should be done by a plastic surgeon. This is especially key when it comes to gauges: “When the skin is stretched and it heals up, it is a permanent change,” says Dr. Zeichner. “The only way to improve it would be a surgery to remove the excess skin. It is the same concept behind repairing a torn earlobe.” If you don’t have a gaping hole but have developed a large scar — say on your belly button, like our elevator pal — a dermatologist can give you cortisone injections to make it smaller. “There are also a variety of creams and lasers that can minimize the appearance of a piercing scar,” says Dr. Zeichner.

Disguise It
If you’ve just gotten your piercing and don’t want it to disappear permanently — but you need to cover it for your stuffy 9-to-5 — consider subtler jewelry. “Often people work at a job where they can’t have their piercings, and they revert to glass or plastic jewelry to keep the piercing open but help minimize the appearance,” says Pineapple. “But plastics — especially cheap jewelry — aren’t meant to be in the body for long periods and can actually create scarring.” 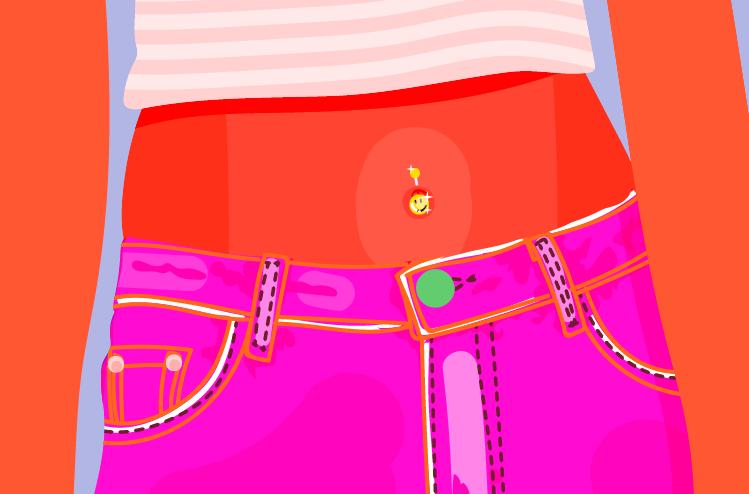 Instead, he recommends neometal titanium retainers — brushed-metal flat discs — especially for nose piercings and beauty-mark piercings on the upper lip. “The flat, brushed-metal discs are two-thirds thinner than the glass tops,” he says. “And the finish means they’re matte and won’t sparkle or reflect light. You can get even a little cover-up or concealer and dab it on top, and it will be invisible or, at most, will look like a slight discoloration of your skin.”

Update It
So you’re stuck with a blah piercing you hate from the 2000s. One solution to fixing it is super-easy — better jewelry. “You can accommodate and cover a lot of things,” says Rajewski. Invest in something trendier, or ask for a cool, updated piercing combo. (Like constellation piercings.)Rajewski had one customer come in with a healed, but dangerously shallow navel piercing — “where if they moved a certain way, it could [get] ripped out.” (Eek.) He redirected things by creating a new hole above the old one. Of course, that meant there was a little hole halfway between the new piercing and the belly button, “so we chose navel jewelry that had a top overhang gem set or a plate bracket that shielded that scar,” he says. Another bonus of getting a new, better piercing is thatthe swelling may help close the older one. “

Maybe there are a few of y’all reading who don’t have a piercing at all, but are thinking of getting one. Well, here’s what to consider: First, make smart jewelry choices from the start. “Once there’s scar tissue — and with nipples, there frequently is — it’s very hard to undo that,” says Pineapple. “I encourage people to do their research and go to a reputable studio that will pierce nipples with barbells instead of rings. A barbell typically causes less scarring because, during the piercing, it creates a straight line — not a curved one like a ring — so it tends to heal faster, which automatically means less chance of scarring and less distortion of the actual appearance of the nipple.”

Smart shopping aside, know your body. “Scarring depends on your genes,” says Dr. Zeichner. “We have no way of predicting who will heal up well and who will form a large scar, but if you have a history of large scars in your family, I would avoid non-ear piercings altogether [if you plan to take them out later]. If you have a skin disease like psoriasis, I’d also avoid piercings because the trauma of a piercing can cause psoriasis in that area of skin.”

Lesson learned? At the end of the day, what you do with your body is your business. If you love your piercing, wear it proudly. If you don’t, try one of these fixes. And most importantly? Always strike up a conversation in the elevator; you never know what hole it will lead you down.